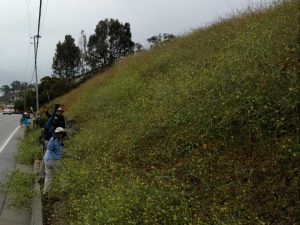 What is about a mile from the Pacific Ocean, less than a ½ mile from San Juan Creek, and along Del Obispo Drive in Dana Point? That’s right! It is Back to Natives’ very own Native Plant Reserve – and it’s in jeopardy! First, a bit of background on the reserve…

The Native Plant Reserve is 2.5 acres of undeveloped land that was donated from the Kato family in December of 2015.

“We are extremely grateful to have received such an amazing and openly generous gift, and we look forward to being able restore the land,” said Back to Natives Executive Director Reginald Durant. 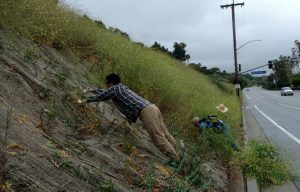 Initially a part of Kato Properties, the native plant reserve is now referred to as Cuesta Kato, meaning Kato Hillside.

“Properties like this one – on a slope – are not ideal for development, but are ideal habitat areas,” Durant explains, “…wild open spaces like this, while small, provide waystations for wildlife like birds and butterflies in urban Orange County where development has limited the amount of habitat available.” 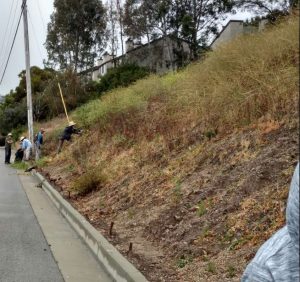 Habitat restoration at Cuesta Kato began in 2016, performed by community volunteers and staff.  Over 30 pounds of native seed has been sown, and thousands of native plants are either coming up or are already in seed. In addition, countless invasive plants have been removed making room for the awesome native plants that are currently thriving on the land such as wildflowers, lemonadeberry, ambrosia, California everlasting, prickly pear, California buckwheat, goldenbush, California sagebrush, even Coast Live Oak. A number of native animals have also been documented using the site, including trapdoor spiders, Cottontail, and western fence & alligator lizards!  Cuesta Kato is becoming a flourishing native habitat thanks to the community for all their past and present assistance, but unfortunately, that could all change, and here’s why…

Last winter’s heavy rains increased the spread of mustard at Cuesta Kato. Not only is mustard a non-native & highly invasive plant, it’s also considered a fire hazard by the city of Dana Point. They want it gone and now. The city warned if the mustard is not removed soon, they will completely mow the reserve! If this were to occur, all the new emerging native plants – and the animals that have made their home there – would be destroyed and everyone’s efforts to save this habitat, will have been in vain. We need your help to save the habitat, and here is how. You can volunteer to assist us in removing the mustard at Cuesta Kato on any (every, if you like!) Friday and Sunday from 9 a.m. to 12 noon, now through the end of July. The mustard is currently still green so if cleared before it dries up from the summer heat soon to come, we can prevent the mowing of our native plant reserve. Sign up here today to help and contribute to saving the environment, one habitat at a time. Nature thanks you!